The abodes of the myth • Villa Lysis

Anyone who has spent a holiday in Capri wishes to establish their residence there. Baron Jacques d’Adelsward-Fersen, a French writer and poet, one of the most eccentric visitors to the island, has succeeded. In 1905 he bought a piece of land overlooking the sea, on the Tiberius hill, a few steps from Villa Jovis, one of the twelve villas of the Emperor Tiberius, at the price of 15,000 lire. He entrusted the architect Edouard Chimotf with the project for the construction of an Art Nouveau villa, with neoclassical influences, which will be furnished with objects from his travels to the East.
Also known as Villa Fersen, at first it was called “La Gloriette”, a name that was soon changed to “Lysis” in homage to Liside, one of Plato’s dialogues on the theme of friendship, or, according to modern critics, of homosexual love.
Fersen made this home in Capri his refuge, far from the Parisian scandals, and remained there until his last day of life in the company of his young Roman love, Nino Cesarini.

The House
Crossing the gate, which bore a brass plaque with the name de Fersen, and after having walked a short avenue, where a priestess of Herculaneum greeted visitors, you come to the front of the house that resembles a Greek temple. A wide staircase leads to the portico supported by four Ionic columns with golden mosaic tiles. On the architrave, the engraving in large black letters of the title of a work by Maurice Barrès “Amori et dolori sacrum”, a place sacred to love and pain, was intended to summarize the essence of Fersen’s existence.
The house is surrounded by a wonderful garden where there is a neoclassical temple. The view from here is superb: below the bay of Marina Grande and in front of the entire Gulf of Naples.
A small balustrade bridge passes over a path that leads to the sea.
Roger Peyrefitte in his book “The exile of Capri” accurately describes its interior.
“In the atrium a marble staircase with a wrought iron balustrade adorned with vine leaves, led to the upper floor; the entrances to the veranda and the living room were on the left; a library covered the opposite walls. In the center a copy of Davide del Verrocchio was smiling; the head of Goliath, at the young man’s feet, was, for Jacques, that of the “justice of the times”. The veranda, paved with blue tiles with white Greek frets, extended in front of the hall which, with three large windows, opened onto a terrace with balustrades towards the Gulf of Naples and Vesuvius. Four Corinthian columns fluted with gold like those in the peristyle supported a domed ceiling. In one corner was a stove.
Upstairs, only one, there was first of all Nino’s room, with a terrace, then Jacques’s vast room which ended in an exedra, with three windows facing the gulf and three towards Monte Tiberio. Across the hall, a guest room, called the pink room, and the dining room, served by a freight elevator.
In the basement, the staff rooms, a second guest room and the room most dear to Jacques’ heart: the opium den called the Chinese room. It was located at the end of the arches which, to the left of the peristyle, supported the veranda and terrace of the great hall. The vast dimensions, the low ceiling, the rocks that emerged in one corner, created a strange impression. Two columns with liana motifs, surmounted by an enormous architrave with symbolic figures, isolated a kind of patio lit by round windows with yellow glass. Chinese inscriptions in gold letters glittered on the walls, framed by mosaics ”

Fersen’s life
Jacques d’Adelsward Fersen was born in Paris on February 20, 1880. Descending from the noble family of Fersen, at the death of his grandfather, founder of important steel mills in Longwy, Loren, at the young age of 22, he became extremely wealthy.
His first approach to Capri takes place in 1897, where he returns after 4 years. In July 1903 he was arrested in Paris on charges of moral outrage and corruption of minors. After serving his sentence, the following year, in the throes of great despair, he took refuge in Capri. He soon starts hanging out with the most extravagant foreign residents. Here he decides to build his enchanted hermitage, the ideal place to devote himself to writing poetry.
At Villa Lysis he lives with his life partner, the young model Nino Cesarini. Many bronze paintings and sculptures in the garden portrayed him in different poses.
All the characters who spent long periods in Capri, including the eccentric Marquise Luisa Casati Stampa, Hans Paule, Gilbert Clavel, Otto Sohon-Rethel, Norman Douglas and Ada Negri, were guests of the Villa.
Fersen decides to end his earthly life on the night of November 5, 1923. After dinner, he went down to the Chinese room, pours champagne and five grams of cocaine into a silver cup, a lethal dose.
He is buried in the non-Catholic cemetery of Capri.

Villa Lysis today
Since 2001, Villa Lysis has been owned by the Municipality of Capri, which, after a long restoration work, has restored it to its former glory. It has reopened its doors to the public as a house museum, where cultural, artistic and musical events are hosted. It has also been rented for weddings and celebrations of international importance. 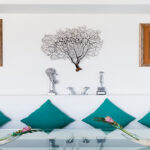 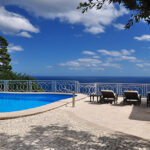 The management of holiday homes

Compare
It is possible to compare up to 4 properties, each addition replaces the first in the comparison list.